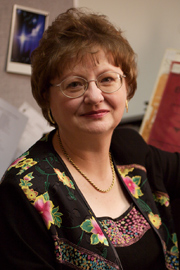 McAmis is a graduate of The University of Kansas where she studied
piano and voice performance. Since 1992 she has been a professor of performance
studies at Ithaca College. where her specialty is voice. She is an accredited teacher of the
Feldenkrais method  of somatic education which she applies to both singers
and performers.
McAmis is also a performer herself and has appeared as a soprano soloist
for the Ithaca College chorus and the Ithaca College Orchestra, and has
had leading roles with the Ithaca Opera Association.
Prefer to download the show? CLICK HERE.