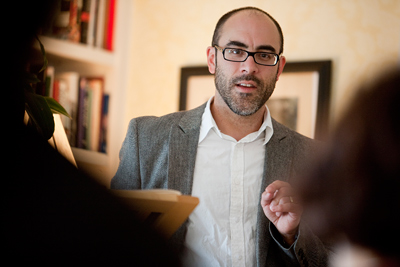 J. Robert Lennon is the author of seven novels, including Mailman, Castle, and Familiar. He holds an MFA from the University of Montana, and has published short fiction in The New Yorker, Harper’s, Playboy, Granta, The Paris Review, Electric Literature, and elsewhere. He has been anthologized in Best American Short Stories, Best American Nonrequired Reading, and Prize Stories: The O. Henry Awards, and his story “The Rememberer” inspired the CBS detective series Unforgettable. The Out of Bounds interview will focus on his most recent book , a collection of short stories, See You In Paradise, compiled over the last 15 years.

“J. Robert Lennon finds the uncanny hidden in the everyday. His dark, subversive stories are both hilarious
and unnerving. “See You in Paradise  is smart, inventive, and full of fascinating particularities of various
wayward humans.”                  — Novelist, Dana Spiotta