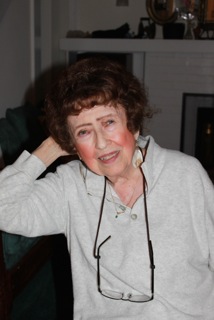 Poet, author of chapbook "Before We Knew"

Joyce Holmes McAllister is a graduate of Ithaca College where she majored in drama. She began
writing poetry in secondary school and was first published in a national literary journal
in high school. Her work has appeared in many literary journals, including The Healing
Muse and The Comstock Review.
At age 85, Joyce Holmes McAllister had her first chapbook published last month by Foothills Publishers. It’s called Before We Knew and includes poems about her early life on a dairy farm in Ithaca, as well as
her adventures living in New York City as a young woman.
Prefer to download the show? CLICK HERE.