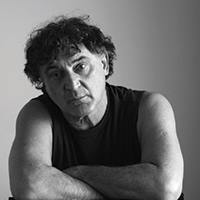 Marinelli earned his BFA in photography and English from Manhattanville College. In the late
1970’s he traveled around the US to photograph the last of the original Italian immigrants. His
resulting book “OLD TIMERS: The Italians in 1979” was published by St. Martins Press.

He also published a collection of iconic cemetery image shot on Polaroid film, entitled
Burden Of Wings. His most recent collection is called “UNDER OLD STARS: Wanderings
in Italian Hill Towns”  featuring stunning B&W photos by Marinelli and prose sketches
and poems by Rob Lloyd, published by Kehrer Verlag.