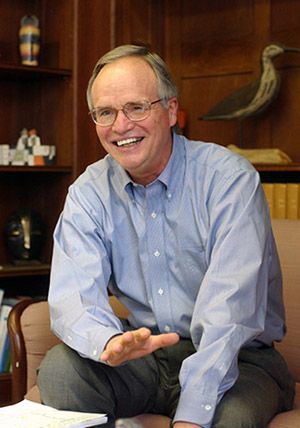 James Gustave “Gus” Speth, was founder and president of the World Resources Institute; professor of law at Georgetown University; chairman of the U.S. Council on Environmental Quality in the Carter administration; and senior attorney and co-founder of the Natural Resources Defense Council. He joined the faculty at Vermont Law School in 2010. A Distinguished Senior Fellow with Demos, he completed his decade-long tenure in 2009 as dean of the Yale School of Forestry and Environmental Studies. From 1993 to 1999, he was administrator of the United Nations Development Programme and chair of the U.N. Development Group.
He is author of several important books, including the award-winning The Bridge at the End of the World: Capitalism, The Environment & Crossing From Crisis to Sustainability.
He recently published a fascinating memoir called  Angels By the River: Reflections on Race, Environment, Politics and Living on the Front Lines of Change.
Prefer to download the show? CLICK HERE.