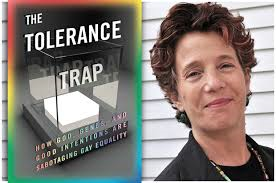 Professor of Sociology, Northeastern University & author of "The Tolerence Trap"

Dr. Suzanna Danuta Walters’ work is centered on questions of gender, sexuality, family, and popular culture and she is a frequent commentator on these issues for the media. Her new book, The Tolerance Trap: How God, Genes, and Good Intentions are Sabotaging Gay Equality (NYU Press) explores how notions of tolerance limit the possibilities for real liberation and deep social belonging. Walters’ previous book, All the Rage: The Story of Gay Visibility in America (University of Chicago Press, 2001), examined the explosion of gay visibility in culture and politics over the past 15 years and raised pressing questions concerning the politics of visibility around sexual identity. Walters is a professor of Sociology and the Director of Women’s, Gender and Sexuality Studies at Northeastern University.
Prefer to download the show? CLICK HERE.