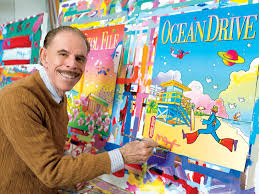 Considered by many to be the world’s most iconic pop artist, Max’s signature “Cosmic 1960s”-style artwork defined a generation. With its distinctive line work and outrageous color combinations, Max’s art epitomized the energy and optimism of the American spirit, and has been featured the world over. In this lifetime, he has served as the official artist for the Grammys, the United Nations Earth Summit, and five Superbowls, and has had his paintings grace the covers of People, U.S. News & World Report, Life, and Manhattan’s Yellow Pages–twice. Throughout the years, Max’s artwork has continued to evolve. Today, his prismatic, bold images are more free-flowing in form, though they are still electric in color.
In 2013 Max published a memoir, THE UNIVERSE OF PETER MAX which detailed, for the first time, the large and small brush strokes of his life’s journey–in his own words. In this visual biography, Max tells his life story–from his birth in Berlin to a childhood spent in Shanghai to his odyssey to New York City, and his subsequent ascension into the celebrity-filled artworld of the 1960s and beyond.